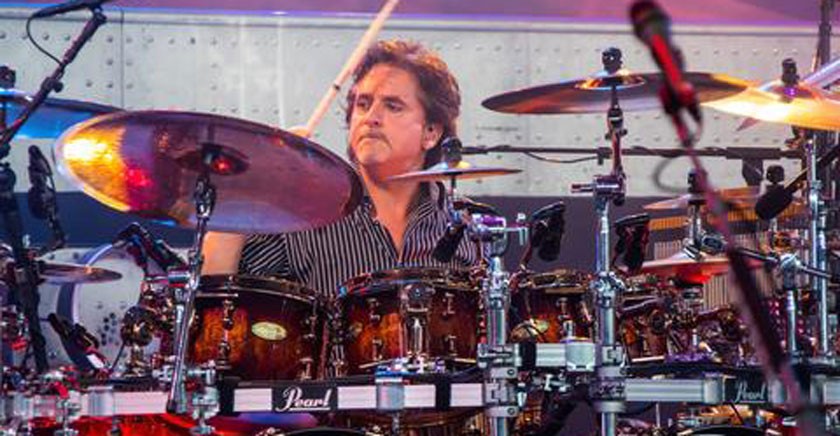 “He’s just an amazing drummer, and an amazing person,” observes noted drum enthusiast and educator David Frangioni, author of 2018’s Crash: The World’s Greatest Drum Kits – From Appice to Peart to Van Halen (Insight Editions). Crash is devoted to being, quote, “the ultimate photographic guide to the world of rock ’n’ roll’s most famous drum kits,” and the 208-page hardback includes a lavish spread on Todd and his massive, current (albeit soon-to-be revised/replaced!) drum setup, as seen above in a photo by Jason Powell.

Give the drummer some — some birthday love, that is! All of us here at Styxworld are proud to assist Styx drummer Todd Sucherman in celebrating the big 5-0, as the band’s ace rhythmatist was born on this day in Chicago on May 2, 1969.

In addition to savoring this most hallowed of days, our expert kitmaster has also been enjoying quite the spring season. Not only did Todd grace the cover of the Spring 2019 edition of Drum! Magazine, he was also named the Best Classic Rock drummer in the Modern Drummer 2019 Readers Poll in that publication’s April 2019 issue. (Incidentally, in addition to what you see in the print edition, the Modern Drummer website also has a more lengthy Q&A with Todd about other drummers he personally and professionally admires.)

“He’s just an amazing drummer, and an amazing person,” observes noted drum enthusiast and educator David Frangioni, author of 2018’s Crash: The World’s Greatest Drum Kits – From Appice to Peart to Van Halen (Insight Editions). Crash is devoted to being, quote, “the ultimate photographic guide to the world of rock ’n’ roll’s most famous drum kits,” and the 208-page hardback includes a lavish spread on Todd and his massive, current (albeit soon-to-be revised/replaced!) drum setup, as seen above in a photo by Jason Powell. “He’s getting the attention he deserves, and the praise that he deserves as a truly world-class drummer in that elite category,” Frangioni continues. “It’s been a long time coming, and he’s totally deserving of it. Whenever I get to spend time with Todd, we talk drums and talk drummers and who he’s listening to — what drummers and what songs he’s listening to. It’s just so inspiring to talk with him and learn from him, and really talk shop.”

As an added birthday bonus gift, we here in Styxworld would like to share with you the inside scoop on the four magical days Todd spent behind the kit on Late Night With Seth Meyers during the week of December 10, 2018. As many of you may know, Late Night appears on most NBC stations weeknights at 12:35 a.m. ET, Monday through Friday (the first four nights are all-new, while Friday is a repeat) — though, of course, you can catch much of the show’s content on their official YouTube channel, official podcast, Hulu, and other streaming outlets.

The following is a condensed, edited version of a much longer exclusive conversation Todd and I conducted about his Late Night appearance in his dressing room following the soundcheck for one of Styx’s full-Mission album rehearsals at the Celebrity Theatre in Phoenix back in January 2019. (If you’d like to read our multi-part interview in full, please head on over to the JOIN area to find how you can become an official Styx Fan Club member in order to enjoy exclusive new Styxology content like this every Monday.)

Mike Mettler: Let’s dive right into it. How did the ball get rolling for your appearance on Late Night With Seth Meyers?

Todd Sucherman: Well, I’ve had a bunch of drummer buddies of mine play on the show, and they kept saying that my name came up with the producer, and also with the guys in the band. And that producer, Eric Leiderman, also grew up in Chicago.

Anyway, Steve Smith [the critically acclaimed and well-respected drummer for Journey and Vital Information] emailed me right after he did the show [April 2-5, 2018], and he told me he had recommended me. Moments later, I got an email from Eric. The only week I had available at the time he emailed me was that week in December, so we set it up. And that’s how it came to be.

Mettler: When did you first sit down and interact in person with people on the show?

Sucherman: I got in town on a Sunday night [December 9, 2018], and stayed at a hotel about four blocks from 30 Rockefeller Center [i.e., the building complex where NBC has its Midtown Manhattan broadcast headquarters]. And the drill is, you arrive on that first Monday at noon, meet everybody, and get your hands on the drum kit. All the guest drummers play the same kit. You can bring some things like cymbals, pedals, or a snare drum, but everybody plays the same kit.

Mettler: I’ve noticed the kit gets positioned differently. Not everybody is facing the band or the camera the same way each week. Are you allowed to move it around much at all?

Sucherman: Well, it’s a four-piece kit, but yeah, you can do that, a little. But playing the four-piece kit they have there is part of the deal.

Then, you get together with the band. [Known as The 8G Band — which is named after the studio the show tapes in — the other bandmembers are lead guitarist Seth Jabour, lead and rhythm guitarist Marnie Stern, bassist Syd Butler, and keyboardist Eli Janney.] You write everything out that’s going to be played for the ins and outs of the commercials and the music for the guests, which are usually between two and three each show. And obviously, you have to learn the theme of the show intro, and the show theme outro.

You write everything that day, and you do a run-through onstage of all the songs around 5 p.m. Then you get dressed, do hair and makeup, and then you’re taping the show around 6:30. And by 7:45, you’re walking out the building.

Mettler: Run and gun! So you wrote your parts to fit the band’s New York punk/alternative style?

Sucherman: Yes. And then we’d work on a riff and go, “Oh, we’ve got to work on some music for Natalie Portman [the lead guest on Todd’s fourth night, December 13] to walk on to.” Someone would start playing a riff, and one of the guys in the band joked that he was in love with Natalie Portman. We’d then try to come up with names for the songs. That one was called “You Devastate My Heart,” or something like that.

There’s a lot of pressure when you’re out there on the floor, because in our in-ear monitors, Eli [Janney, The 8G Band’s aforementioned keyboardist who serves as the show’s Musical Director whenever Fred Armisen isn’t there] will count off songs going into commercials, but I cue all the guests. Seth will say, “Please welcome Natalie Portman,” and I will hit the snare drum on Beat 4, and that brings the band in. Then I cue the band for when to stop.

Mettler: And that sequence doesn’t always happen in the same amount of time during each guest’s entrance, either.

Sucherman: Exactly. You have to watch when the guest is seated, or when Seth Meyers seats the guest. You have to gauge when to stop there, because when their butt hits the seat, they want the music to stop [snaps fingers], and the stop has to be tight.

When you’re coming back from the commercials, you have to watch the floor producer. There are three people you have to pay attention to — and one of them is yourself. You can’t space out for a moment, because you will mess something up, and having any second of dead air is bad on television.

There is pressure when you get out there, but I will say, from Seth, Eric, and everyone in the band — everyone in the show was super-nice and super easy-breezy, and it was not the New York, kick-you-in-the-ass experience it could have been. Everybody was super-cool.

Mettler: How much personal interaction did you wind up having with Seth Meyers (pictured above at right with Todd at the end of their week working together) during that week in December? Did he introduce himself to you as it all got started?

Sucherman: Seth introduced himself to me right before I was going on for the first taping [December 10]. I had my in-ears in [i.e., his in-ear monitors], so I didn’t hear a word he said. At that moment, it wasn’t anything more than a smiley face, a handshake, and a “Hey, man!” And I didn’t want to talk to him just as he’s going on, because I didn’t know what his show routine is. But, yeah, I had a couple of nice chats with him that week.

And then, at the end of my run there that week, Seth came over and gave me a big hug and said to me, “I don’t know all that much about music and drumming, but I can tell when a drummer’s great. There’s a big energy, and it fills the room — and you were absolutely fantastic.” I thought that was a really great compliment, because he’s had at least 90 amazing drummers in there.

Mettler: Sounds like you may get a callback to play on the show again, because I’ve seen a number of well-liked drummers come back to the show more than once.

Sucherman: Yeah, they want me to come back in about eight months [i.e., circa August or September 2019], which is the cycle they’re looking at. And it’s nice to be asked back, because I’ve heard some stories about some people who haven’t been asked back! (both chuckle)

Mettler: One of the things I noticed during your week was that you changed something subtly during the intro, every time. Once the opening credits came on, there would always be at least one thing somewhat different each time you played the intro theme. Not many people do it that way.

Sucherman: Oh yeah, yeah. But that’s because I want to play different things whenever I play anything. Eric [Leiderman, the aforementioned Late Night producer] is a drummer, so I wanted to play different stuff for him. He’s got a microphone on the other side of the studio, so I might play a lick where he’ll go (exclaims), “Ahhhhhh!” into my cue, so I’m also trying to make him excited at the same time.

Mettler: Well, that was all definitely noticeable to me, as somebody who watches the show every night. Finally, did you find anything out over the course of those four days at Late Night that you feel you hadn’t experienced before that you’d consider to be new under your belt?

Sucherman: No, because I kind of knew how it was going to work. All I know is, whenever I was playing on Late Night, I was having a blast. The show was just a lotta fun, and the fact that everybody was relaxed made it fun. It was a great week.